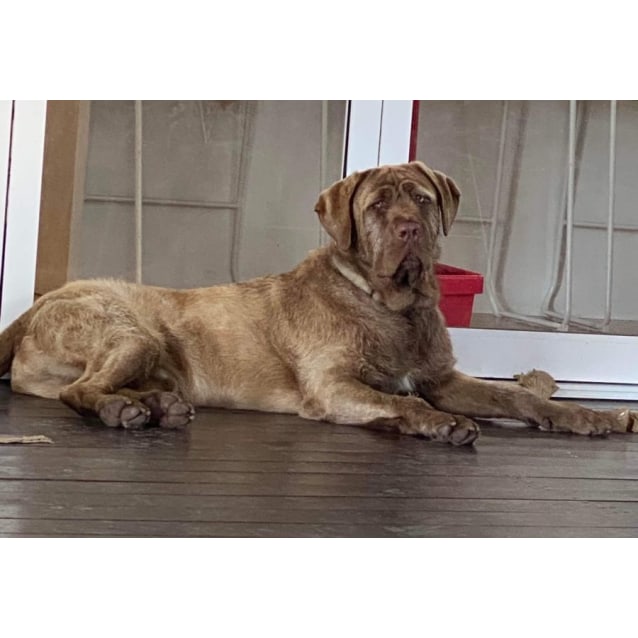 Chewbacca or Chewy as he’s affectionately known, is a Neo Mastiff x Wolfhound – a sweet knucklehead looking for the right place to call home.

At only 14mths old, he’s already had a couple of false starts but each time, we learn a bit more about him, we are better able to determine what his right match is. Chewy used to live with another male dog but after a while they didn’t get along anymore so for this reason we will not be placing Chewy with another male dog.

Even though he’s 50kg, Chewy is still a baby in the head, he has no idea of his size, he plays silly, moves silly, talks silly and chews silly things when he’s alone too long. He’s also tall enough to pull things off tables and benchtops and while this behaviour probably won’t last forever you need to be committed to managing that appropriately for the next year or two possibly.

Chewy is a bit of a velcro dog, meaning he will stick to you like glue! He loves his humans! He’ll be under your feet all the time… and occasionally on them! He also will push into you, push past you and when excited may push you over!
For these reasons we are not willing to place Chewy with children younger than 12 years old.

Chewy is fairly unfazed by cats and smaller pocket pets, preferring to be with his humans. He likes to play with soft toys and will toss them around and try to catch them, he enjoys a game of fetch and loves to play tug as well.

He enjoys a walk each day as part of his routine, Chewy is interested, but doesn’t appear to be reactive to other dogs when walking. He can be quite strong on lead so an owner who is able to withstand his 50kg+ pull power is necessary, otherwise he just won’t get walked and we don’t feel this is fair to Chewy.

In summary Chewy’s best matched home has:
✅ someone home more often than not. Perhaps a person who works from home or a couple who have differing hours of work.
✅ a generally steady routine
✅ a secure yard
✅ no children younger than 12 yrs
✅ no male dogs
✅ permission for him to be inside when you are (including to sleep which he loves doing a lot of)
✅ an owner willing to work on his separation anxiety (preference given to those experienced with crate training)

Applications that do not meet the listed criteria will unfortunately not be considered, under any circumstances.

**Preference will be given to applicants who are experienced and demonstrate understanding of the Neapolitan mastiff breed. They are NOT a breed for first time dog owners.

Previous
Next
Apply Now!
Form for Surrendering Your Animal to Tiki
Application For Adoption
Donate to Tim Tam & the "Biscuits" Ongoing Care

Registered before? Log in to use your saved details.

If you registered an account, please enter your details below to login. If this is your first time, proceed to the donation form.